Things I Did Today!

1. Went grocery shopping at 8 AM
2. Thus, took the A to the 7 to the 6 to get to Hunter
3. Attended classes
4. Walked 60 blocks (from 68th & Lex to 8th & 5th Avenue) alongside my atheist friend Mike
5. Chilled on the lawn in Washington Square Park (listening to accordion and marraca-music). Spent five hours in Mike's company discussing films, Judaism, atheism and more.
6. Refused to sign a petition for Central Park horses to be treated more humanely (nursed back to health and placed in sanctuaries) since I think it's perfectly natural for a horse to draw a carriage. Then got into a discussion with the guy who wanted me to sign it (he attends The New School) about whether or not we actually exist, a la Descartes.
7. Took the F train from 14th Street to Delancey
8. Saw the incredible (free!) production of the Drilling Theater Company's Shakespeare in the Parking Lot's "Measure for Measure" (the actors are great! and it's free! and the actresses are skimpily clad, so if you're not into that, don't go - also, Shakespeare's quite bawdy and at one point in their adaptation they hold up a purple dildo, so don't go if that moment will bother you) 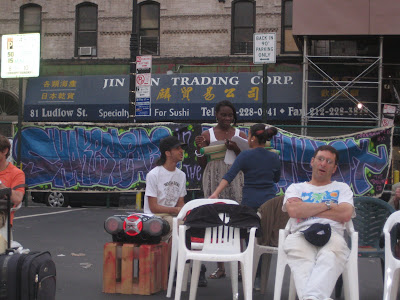 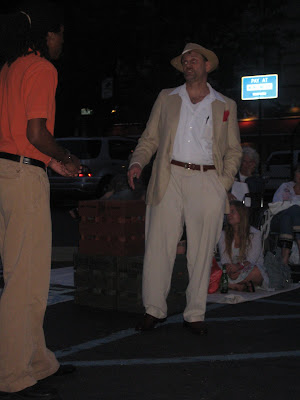 Lucio, played by David Marantz, was my favorite character (and Marantz portrayed him so brilliantly!)

9. Took the F to the 1 to go home
10. Met the most awesome black guy on the train. He's a personal trainer and his brother plays basketball in Chicago. He offered to ride with me to my stop, but I said he should get off by his (157th.)

Today's sure to be even more interesting, since cooking for Shabbat has to occur without any water (they're turning the water off in my building from 10 AM-5 PM.) Ack.

#6 reminds me of the guy with the huge dog in the Verizon Store on Tisha B'Av who wanted me to watch a "9/11 Truth" video/sign something. I passed, instead having a whole discussion with him about large vs. small government, and was surprised to find the rare consistent person who would feel government is too powerful and too big.

I hate the sidewalk petitioners.
I just ignore them--as 99% of the time I'd likely get itno an argument with them.

The Lyndon LaRouche people who I come across in my neighborhood on the weekends though are funny in a kind of perverse way. They're just so off base and kooky, that they're a source of humor.

The 9/11 "truthers" are ugh, just a different pain in the behind.
(it's too off topic for this post).

I don't know if this would actually be faster (and of course, traffic could affect it), but hopstop.com says the M98 bus gets from the Heights to the Upper East Side in 1 hour.