Olly & The Raggedys, The Little Old Lady and Scarsdale Cousins

As you may or may not know, the Raggedys are extremely kind people. When I needed a place to stay, they let me live in their apartment for a week and a half. Their adorable children made sure I felt welcome by ensuring that my door was covered in beautiful pictures and posters declaring the fact that I should feel myself to be at home. 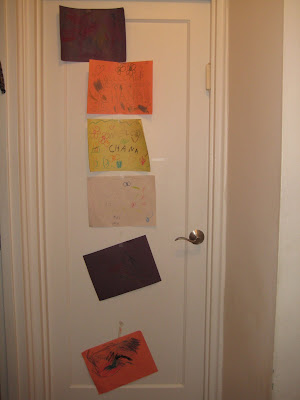 How many people do you know who would simply allow a homeless child into their apartment for a week and a half? Yet the Raggedys did it without complaint; they smiled and had fun with it and made sure that I had a party of a time. There was storytelling, crepes for breakfast, pancakes, homemade pizza, "your name is melting," discovering the Food Network and an extremely exciting visit to the Bronx Zoo (I had never been there before) during my time there.

The animal I saw at the zoo which I most enjoyed is called a tapir. As RaggedyDad noted, the tapir looks sad, and its skin looks as though it feels like velvet. Its sadness, velvety skin and softly-padding footsteps combined made it something that I would enjoy communing with. 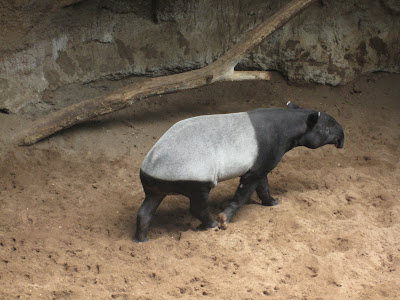 The Raggedys ensured that whether it was zucchini muffins, chocolate cake or interesting types of tea, I lacked for nothing. They are incredibly kind, considerate people and I thank them so much for the unbelievable chesed they practiced towards me.

To ensure that I would lack for no entertainment, The Little Old Lady was happy to allow me to come along with her upon her expedition to the American Girl Doll Place on 5th and 49th. Such a lot of fuss and nonsense about a mere doll I have never seen, but it was vastly entertaining. See, The Little Old Lady had brought in a doll to be fixed, and what do you know, but there's actually a doll hospital there! 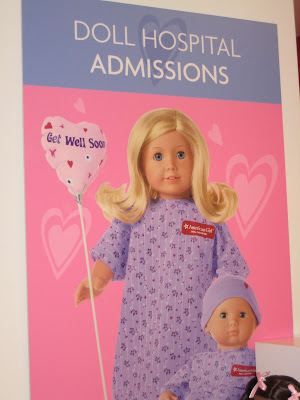 So we brought our doll to the doctor. He actually had us take off her outfit and put her in a little pink hospital gown and wheelchair. Then he amicably posed for this picture. 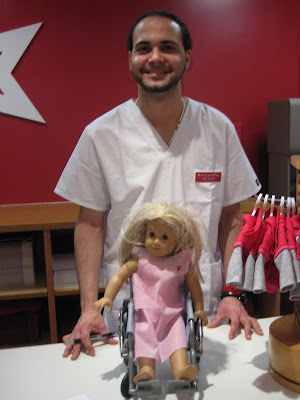 After he wheeled away the doll, The Little Old Lady informed me that upstairs there is actually a cafe in which little girls can have tea with their dolls while eating food themselves. To me, this seemed utterly ridiculous (I sensibly had all sorts of imaginary delights with my doll- which was not an American Girl doll, heaven forfend- at home.) Anyway, here's what the cafe looks like: 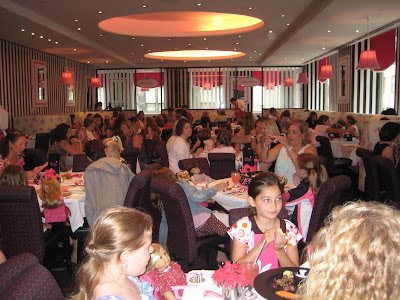 I should mention that I had chosen to accompany The Little Old Lady after visiting Pearl Paint. This meant I was carrying an incredibly bulky package of canvases around and my bag ripped. We tried to ask a lady at the front for an American Girl Doll bag but she told us we had to purchase something in order to get one. The fact that The Little Old Lady had already paid for the doll (I named it 'Serena') to be fixed and thus ought to get a bag escaped her. Refusing to take no for an answer, The Little Old Lady insisted that I ask the Doll Doctor for a bag. He very nicely gave me one, and thus I could carry my canvases. Hurrah!

After leaving American Girl Doll Place, it began raining. Thus, to escape the rain and to eat lunch, we ducked into Cafe K, which has an incredibly pretty way of serving its Gran Torino (hot chocolate with a chocolate bar melted inside.) 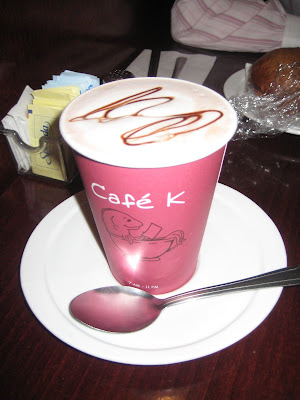 After our lovely meal of pancakes and muffins, we walked back to Penn Station where The Little Old Lady went home and I headed off to Scarsdale and my amazing Scarsdale cousins! They had made a barbecue for me, which was fantastic, and intriguingly Yechiel's friend (his name is John) came over in order to do a presentation as part of his summer job. Yechiel's friend is advertising a company called Cutco. Cutco makes knives. 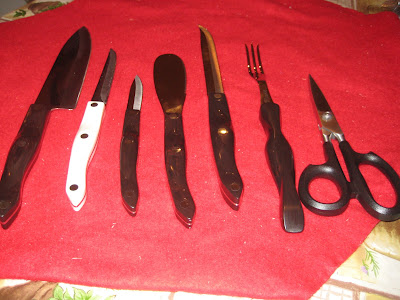 In an absolutely fascinating display, John demonstrated the advantages of Cutco's knives over other knives. For one thing, Cutco's knives have wonderfully comfortable handles. Their rivets are made of silver instead of brass (which is what most knives are made of) and thus bacteria and other mold does not form therein (brass expands and contracts with exposure to heat and cold, so when you put it in your dishwasher, your knives suffer.) Also, there is a Forever guarantee where your knives are supposed to literally last you forever- and all sharpening is free. You send them in, they're sharpened and are sent back to you. But the coolest part of the presentation was when John demonstrated how incredibly sharp the knives are. For example, here's John cutting a penny with a pair of Cutco scissors: 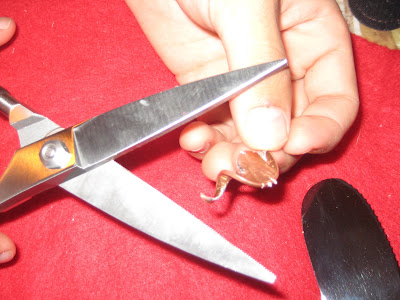 Cutco is not sold in regular stores like Williams-Sonoma. That's because the company sells directly to the customer. If it were to sell through kitchen stores and other outlets, the price would be forbidding. By selling directly to customers, Cutco does well and the customer does well. It's a perfect situation. If you're interested in having someone come out and do a presentation for you (all kinds of nifty things occur during the presentation, including a change- you take out your sharpest knife and try to cut through rope, then watch Cutco knives cut through rope like butter...) let me know; I'll hook you up.

In any case, Yechiel (who is heading off to the IDF soon) and the rest of the Scarsdale Cousins rented a U-Haul in order to transport everything I own to Washington Heights. Here he is driving the contraption (I sat beside him, and thus, I can now say that I have ridden in a U-Haul. Hurrah!) It was super nice of him to give up his Friday to shlep boxes and make sure I could move into my place. 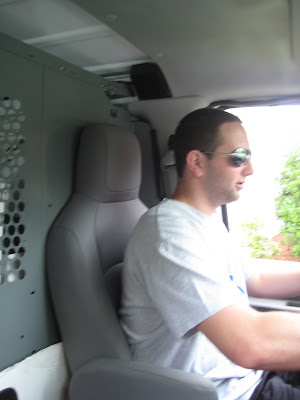 After driving all the way to my apartment, Yechiel & Co set me up and ensured that everything was perfect. Here are some shots of my beautiful apartment! Thanks so much to the incredibly amazing Scarsdale Cousins. 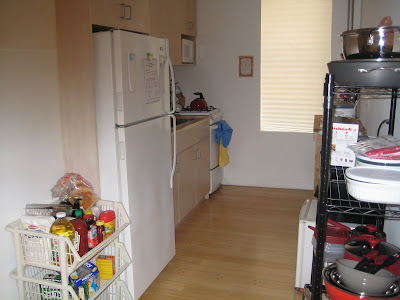 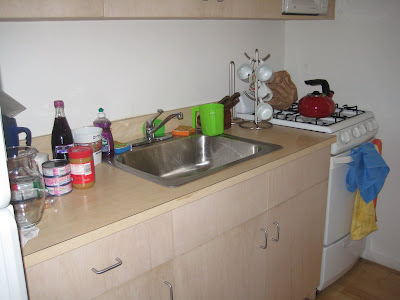 And here was the setup for breakfast this morning (homemade pancakes!) 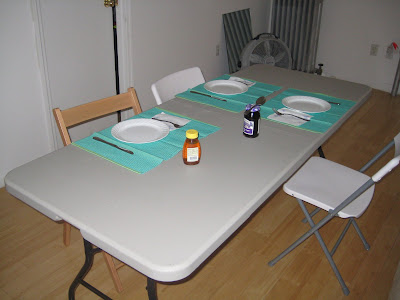 I have been truly blessed to know such fantastic people. Thank you so much to everybody who has been kind to me. I really love you all.
Posted by Chana at Sunday, July 05, 2009

You are very lucky! Enjoy.
The kitchen looks nice.

What a fun post!
The apartment looks nice and clean,the kitchen looks lived-in already.Not bad for only being there for a few days!

p.s. I'm shepping so much nachas. Chana! We toiveled those, remember!!!!!

Wow!
Impressive.
When are you starting school,now that you are actually living in your new apartment?

Chana,I've been reading your posts about the toiveling and moving into your new apartment. I didn't know how you were going to get all that kitchenware to NY,but,apparently,you did. I'm impressed just like your other readers. Thought you might enjoy reading the following poem:

God bless my little kitchen
I love its every nook
And bless me as I do my work
Wash pots and pans and cook.
And may the meals that I prepare
Be seasoned from above
With Thy great blessing and Thy grace
But most of all Thy love.
As we partake our earthly food
The table before us spread
We'll not forget to thank Thee, Lord
Who gives us daily bread.
So bless my little kitchen, Lord
And those who enter in
May they find naught but joy and peace
And happiness therein.

I remember driving a 16 foot high-cube U-Haul (technically it was a Budget truck) downtown on the Kennedy expressway and then back during rush hour.

Three Cheers for the Raggedys! :-)