So I'm sick. Sick beyond all reason. My throat's on fire and so are my ears and whenever I swallow, it's like I've chosen to choke down knives for some vindictive reason known only to me. The blades pierce the skin and cause a ripping sensation which means I'd rather pant like a dog, taking shallow breaths of air, than swallow if at all possible.

In any case, I owe tremendous thanks to my wonderful friend Fudge who informed me of the fact that Duane Reade has a walk-in clinic that is open on Sundays. It is located on 50th Street & Broadway- the 1 train goes right there. Their Sunday hours are theoretically 11:00 AM-7:00 PM but I saw that they were treating people before 11:00 proper, so that might be subject to change. In any event, it's awesome. You go up the escalator and over to aisle 16 where you'll see a pretty little clinic where you can sit down and merrily cough your lungs up (as I proceeded to do.) People with insurance or Medicare, you should totally check this joint out; it's a party.

I met a lovely young couple featuring a raven-haired Jewess by the name of Serena. (I once named an American Girl Doll- not my own- Serena.) In any event, she was talking about hosting a dinner party Monday night instead of Sunday night because if she hosted it Sunday night she would be the only one fasting for Yom Kippur and that would be difficult. I leaned over and in my hoarse, aged voice said, "I couldn't help overhearing that you are Jewish. I'm Jewish, too. Wanted to wish you a shana tova u'metukah and a kesiva v'chasima tova." They promptly returned the wishes and she went back to mopping her nose with tissues.

The majority of the patients at the clinic are tourists. There was an Australian lady and a British lady and lots of people without insurance. Most everyone there was in their 20s and 30s. That's unsurprising; really elderly people probably have doctors they routinely visit and who they can bother on Sundays.

In any event, this lovely lady named Shakima tried to perform a strep test on me. I say tried because when she attempted to use the tongue depressor and stick a Q-tip down my throat, I gagged. I'm not good about people sticking long cotton swabs down my very tender, wounded throat. In any event, she tried again but couldn't really get anything; thus, the strep test came back negative. I also got to find out that I'm running a slight fever- 99.3. In any event, the doctor herself took a look and told me my throat is "cherry red." That sounds like a lollipop flavor. She prescribed penicillin for me because I had exposure to strep, my throat is killing, and I don't have any other symptoms (congestion, etc.) The pharmacy filled the order within 15 minutes. And then this super nice lady helped me pop the cap off my pill bottle (I don't know how to open pill bottles) and I took one and I still feel like something the dog dragged in, so so much for that endeavor.

Last year on Rosh Hashana, while at Landers, they attempted to freeze us all to death. (A lot of shuls do this. They turn the air conditioning on full blast in an attempt to ensure that our contrition before the Lord improves due to our temperature dropping.) So I wore the following sweatshirt in shul over my clothes (as it was the only thing I had). This is the back of the sweatshirt: 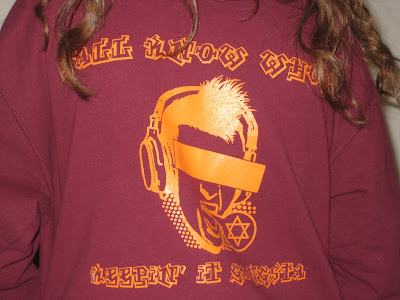 It reads, in case you can't tell: "Y'All Know Who's Keepin' It Gangsta." It's a Binghamton NCSY sweatshirt (I love Binghamton.) You can imagine the looks I got. It was an experience not to be exchanged for the world. I can reasonably attest that I am the only girl to ever wear a sweatshirt reading "Y'All Know Who's Keepin' It Gangsta" in shul at Landers on Rosh Hashana.

The reason I mention this is because I was accoutred in that sweatshirt, black pants, a black skirt and combat boots in this 76 degree weather, which is always fun times. For some reason this meant that kind looking black men regaled me with pamphlets advertising Jesus' Second Coming. I don't know if it's because I was rocking the homeless look, I had that broken girl-glazed over expression which suggests I need saving or they're just drawn to people who look unhappy. In any event, if any of you would like some literature on Jesus, feel free to stop by my apartment, 'cause I've got plenty.
Posted by Chana at Sunday, September 13, 2009

usually takes 24 hours for the meds to kick in

What did you learn about the supposed "second coming". I think that the subway preacher probably was 'attracted' to you, as you were probably willing to give him an audience. (I just tend to ignore 'em).

now I stay in touch..