I Welcome(d) The Shabbat Queen, Part 6

This Shabbat boasted the presence of the irrepressible (even while ill) Dana, The Girl From Philly, The Challah Man, Guitar Hero and The Ice King (however, that title is given due to his prowess at ice hockey, not because his personality is off-putting- far from it.) The Ice King brought us Australian wine while The Girl From Philly provided drinks and the most amazing Kit-Kat Cupcake straight from Philly! I would also like to thank The Golden-Haired Girl for hosting me Friday night and throwing us a champagne party *smirk*. And shoutout to Fudge for being good company and making an awesome red-velvet cake! Also, no Shabbat would be complete without the refrigerator light turning itself on at The Golden-Haired Girls' apartment, which led to my making friends with Sergei, the amazing Russian neighbor who is not Jewish and agreeably helped us out. 'Cause I'm awesome at making friends with random Russian guys on Friday nights!

On that note, it occurred to me that you might be curious as to where I live. Thus, here is my room: 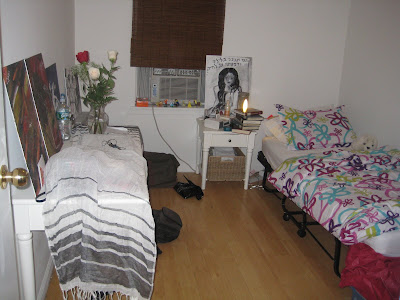 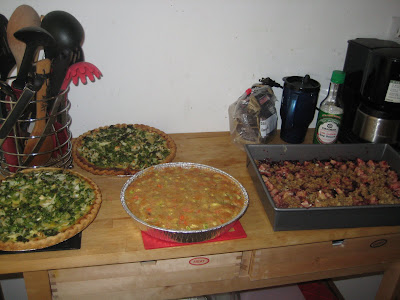 Then we had spaghetti with meat sauce: 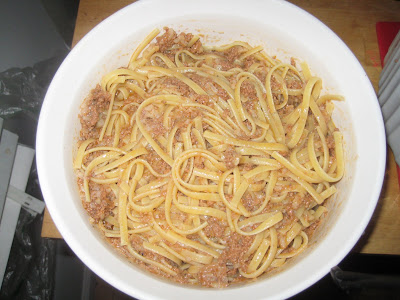 This is the base for Bukharian cholent (before it is put into the crock-pot): 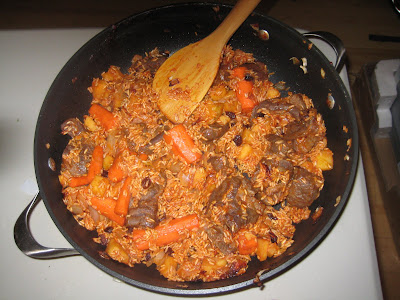 And then we had another Bukharian delicacy, grape leaves! Here is how they look when first taken out of the oven: 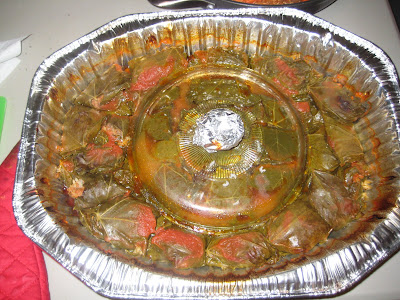 And here they are when placed into a container: 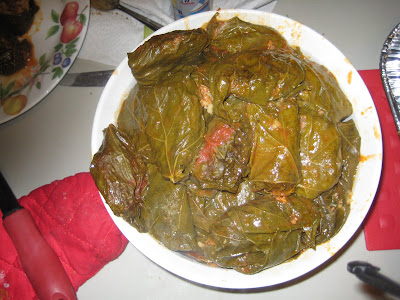 On that note, this week I also saw the stars of "Gossip Girl" (I went to see where they were filming on set in New York- at the Hotel Empire near 59th Street.) So when you watch Season 3, Episode 7- I saw them filming that episode. Squee!

Also, shoutout to The Little Old Lady (who doesn't even read this, but who I would like to acknowledge) because she is awesome and called me back with beautiful Shabbat wishes even though I hadn't expected that because she was super busy as this was a Shabbat of happy tidings for her family.
Posted by Chana at Saturday, September 05, 2009

What a great place for the figurines! The cholent is picture-perfect:every grain of rice is visible, not a mush at all,kudos on grapeleaves,too!
I love it how your room is sooooooo you-multitude of colors, books,books and more books,roses and paintings! Keep on learning and prospering! Very proud of you.

Hey Chana,the foids look awesome!
What does the chlent taste like. Is is sweet ? Spicy? I never had a rice cholent before.
Your room is lovely btw.

Yaaay, Bukharian style! Those guys know how to eat! Properly cooked as well..

And I like that matress-holder thing...it's so neat. (My bedframe is taking up way too much space, so..)

the grape leaves are incredible... it's 1am and i just polished off six of them.... i love you chana

Is that really rice in the cholent?
Can't say I've ever seen that before.

Very nice set-up on your room. Is it always that clean? (If so--can you give my sister some lessons on keeping a clean room?)

Oh, and more importantly, what books are on your bedside table? [Isn't that the obligatory question for all celebrities?]

greetings to all.
I would first like to thank the writers of this blog by sharing information, a few years ago I read a book called guanacaste costa rica in this book deal with questions like this one.

Hello .. firstly I would like to send greetings to all readers. After this, I recognize the content so interesting about this article. For me personally I liked all the information. I would like to know of cases like this more often. In my personal experience I might mention a book called Generic Viagra in this book that I mentioned have very interesting topics, and also you have much to do with the main theme of this article.