Or as Dana dubbed it, Brinner. 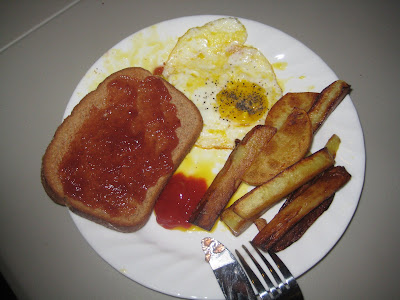 Life Lesson: Say something authoritatively enough and no one will question you. Also, do not apologize for your religion if you believe that it is true. (That one I learned from the Rav but saw put into practice by Jordan.) A statement only those who have explained homosexuality within the context of Orthodox Judaism to a class full of people who disagree with you can utter. Sometimes bravery lies in the tongue as opposed to the sword.
Posted by Chana at Monday, July 27, 2009

Amen. Re: saying authoritatively, can be used for good or bad. But you already know that. :)

Breakfast for dinner is always fun. I prefer pancakes to eggs though. :)

Brinner is amazing, one day i had brunch and brinner. that was a good day!
(N.B. Turk from scrubs has been going on about brinner for a while)