I woke up at this ungodly hour feeling the strong urge, no need, to write. It's not really ungodly- 5:50am- except that I went to bed at 1:30am. As I do when I stay up all night reading about coronavirus, about the risks as they apply to me and people I love.

I'm living in a strange time, and I sense that I will want to document it. Writing is the way I understand myself- it's always been the way that I am in touch with my soul. So perhaps I can write myself to understanding of the world I'm living in now- a confusing one, but a beautiful one.

The novel coronavirus originated in China. We saw the death toll rise. We read about whole sections of China being under lockdown, being quarantined. And yet I thought to myself, "This can't happen here, in the United States. That's something happening there, to other people. People I don't know." And I chuckled as I read stories of children crashing their homework app, giving it one-star ratings in the app store so that it would be removed. I even shared their story with students, along with reassuring information that people in their age demographic were not being severely affected by the virus. In short, I played it down- because I believed it wasn't a big deal. People were comparing it to the flu, and I wasn't scared of the flu.

Then it was elsewhere. Italy. And finally, people I knew were being affected. The Modern Orthodox high school SAR decided to close its doors and move to online learning. My colleagues at Frisch were self-quarantining at home. I still did not believe, and was angry when my husband spent what I felt was an exorbitant amount of money stocking up on groceries for two weeks. At last, we realized there was a strong chance it was coming our way and my colleague and I reached out to our head of school to plan next steps and how to prepare teachers for our imminent reality of Zoom learning, and reliance upon PowerSchool to post all of our materials. I was also scrambling because my younger child's school had closed for Parent Teacher conferences on Thursday, March 12- but then decided not to reopen. I stayed home on Friday, March 13 to watch him and emailed my principal that I had to figure out childcare for him and my daughter, as her school emailed us that Friday that they too were closing. My daughter was upset because that Sunday was supposed to have been parent-teacher conferences and she had created a wishlist with books she wanted us to purchase at the Book Fair. At that point, my biggest concern was that my children were home while I was still teaching at school, and I didn't have a plan in place. My head of school emailed me to say chances were their schools would be closed for closer to 5 weeks, not 2, and I began panicking about having them home with me through Pesach. How exactly was I going to make Pesach with two little ones running around?

Despite watching my son that Friday, I came in to have a meeting with our head of school and my fellow tech guru so we could make a plan to train teachers. Our principal held an all-faculty Zoom meeting that Saturday night to prepare everyone, and my colleague and I taught all the teachers how to use Zoom and PowerSchool during Monday, March 16. By then, Governor Pritzker had cancelled all schools, private and public, and said they would be closed through March 20th. This was unprecedented- Chicago Public Schools almost never closes, and they had already had an 11 day teachers' strike. Obviously, our school was cancelled as well. That Monday was the day that students came to school to pick up their belongings while my colleague and I held trainings in the Science Commons. I was there from 9:45am-4:30pm; he was there longer. We set people up on their iPads and personal computers and we hoped and prayed that everything would go relatively smoothly.

Tuesday, March 17, was our launch day. Immediately, we needed to troubleshoot- and we did. I sent out a Tech Tools Cheatsheet with every possible weblink for our school system our teachers could need. I relied on Screencastify to make short videos to walk everyone through what to do. The next day, we responded to teachers' needs regarding Zoom, and sent out a Zoom cheatsheet. And then I taught teachers how to upload their PDFs to Google Drive and share them with their students. Throughout all of this, I had also offered to help others who were in a bind and struggling to figure out new technology, posting in JEDLAB. I posted because my friend Marc told me he thought my skills would meet a need, and I was shocked, surprised and gratified to see that over 143 people liked it. Suddenly, I was receiving 30 emails and making times to talk to people I had never met before- trying to help them see which tech tools would be a most appropriate fit for them. Here's the post for the sake of posterity: 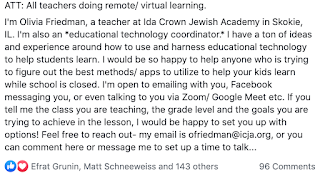 That entire week was exhausting. I went to bed very late, working on helping people- those I knew and those I didn't- with technology. I was also heartsick over my first class with misbehaving students (they invited crashers to our Zoom meeting, played inappropriate music and scribbled all over my shared screen). Even though that was only one class out of five, my reaction tends to be to focus on what went wrong as opposed to what went right (which is to be expected- that is, after all, human). I also spent the week sad for my seniors- people who had been looking forward to Fashion Show, Senior Retreat and even Graduation- when we now did not know if any of that would happen.

While this was occurring, Chicago was engaging in an internal battle over what to do with the shuls and places of worship. The CRC, represented by Rabbi Yona Reiss, sent out a letter explaining that all shuls needed to close immediately, that no house minyanim were permitted, and that smachot had to be celebrated in small ways, with very few people in attendance. However, Rav Fuerst offered a different psak, and so some other shuls stayed open. I knew this was a mistake and found it frustrating, but didn't have any power to correct it. Later, I urged a doctor I knew to call Rav Fuerst and explain the medical situation- later in the week, the Agudah joined with the CRC and *all* the schools closed. Additionally, Chicago Public Schools (and thus us, who would follow suit) were closed through April 20, which was after Pesach. Governor Pritzker also issued a shelter-in-place order for all residents of Illinois lasting through April 7. If we were not essential personnel, we needed to work from home, going out only to get groceries or visit the pharmacy.

In the wider world, coronavirus was affecting people my age and people were becoming critically ill, though not dying. My colleagues at Frisch had colleagues who were our age and hospitalized. This worried me, as this illness had originally been billed as one that only affected the elderly and immunocompromised. I was also reading about restauranteurs who were losing significant portions of their income because Pritzker had restricted their restaurants to offering takeout or delivery only. My husband and I ordered from some restaurants solely to support them during this difficult time. My Grandma, who had originally made plans to spend Pesach in Israel, changed them to come home to Chicago. Then, she decided to change them again, most likely staying in Florida to avoid flying and coming into contact with individuals who might have COVID19 in the airport. More concerning, we had friends who were running out of PPE (personal protective equipment) because lay individuals had made a run on stores and purchase so many n95 masks. Now we had websites like FindTheMasks where people were begging for regular individuals to donate masks to hospitals and medical centers. Instacart and other services that allow for groceries to be delivered to one's home were so overwhelmed by demand that it was impossible to book deliveries for at least a week out.

There were also positives. Facebook groups such as Parenting Under Quarantine and Homeschooling When You Have To cropped up, everyone offering positive feedback, support and tips to one another. The vast majority of EdTech companies expanded their free offerings or started offering full use of their product for free to anyone and any school that had been affected by coronavirus. Schools that were closed, including my children's schools, started sending home links for Zoom meetings so the children could do Tefillah or Asifat Kitah together. They also provided pre-recorded videos and packets so school could continue from the comfort of our homes. At my request, one teacher got my daughter set up with GetEpic so that she could listen to as many audiobooks as her heart desired- for free! People did their best to support their local businesses and bakeries- and bakers got creative. Now that they were no longer providing cakes and cookies to celebrate people's smachot, they decided to provide cupcake-decorating kits or cookie-decorating kits, or, like North Shore, to offer delivery of their products to people's homes.

None of us know how or when this ends. My student started a blog, and made an argument that later made it to the New York Times (albeit written by someone else), that our current solution to coronavirus is worse than the disease. It's going to throw us into an economic recession, and possibly an economic depression. Meanwhile, people are saying we will be home through May, and maybe even through the rest of the academic year. Nobody knows. We are all aiming to keep our spirits up, and hoping for the best outcome possible. Schools are getting creative to help students stay positive - ICJA had a concert this past Friday with Simcha Leiner for exactly that reason. We have more fun online activities in the works as well.

Social distancing, quarantine, the fact that the Javits Center in New York is being eyed to become a field hospital...it's like we are living in a bad dream. I can't help but think about my prayers this past Rosh Hashana, and how I recited Unetaneh Tokef, thinking as I always do about "who will live and who will die." This year is the year where "who by plague" is applicable. But I hope we can find treatments for this illness, and eventually a vaccine as well, and that we will be able to weather the storm and come out more united and connected on the other side.
Posted by Chana at Sunday, March 22, 2020 No comments: