I've been watching the HBO rendition of "His Dark Materials," an adaptation of the series of books written by Phillip Pullman. I've just finished episode 1x05, titled 'The Lost Boy.'

One of the things this adaptation of the series brought to mind was that intercision (or cutting a child apart from their daemon, what we would call our soul) was akin to experiments performed on children during the Holocaust. In the book depiction (which I read when I was much younger) it seemed more similar to castration, or separating a child from their sexuality. In the same way the Church might do that to altar boys to keep them as sopranos (and so that they might remain pure/ untouched by original sin), so too the Magisterium is performing this separation upon children. (The castration comparison also fits the puberty imagery relating to the "change" when one's daemon retains one form forever.)

But the Holocaust imagery is an important and disturbing parallel, and I think the show is right to play up that connection. (Especially as we approach a time where so many do not remember or have forgotten the Holocaust and the scope of the tragedies that occurred during it).

One thing the show got wrong- the scene in the books when Tony is found holding the piece of dried fish instead of his soul is one of THE MOST DISTURBING scenes in ALL of children's literature (and I have read a lot of children's literature) and they cut it. This was a mistake. (Screenshot below- click to enlarge- of Lyra understanding the importance of the fish when the adults do not). 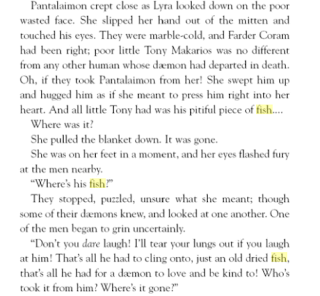