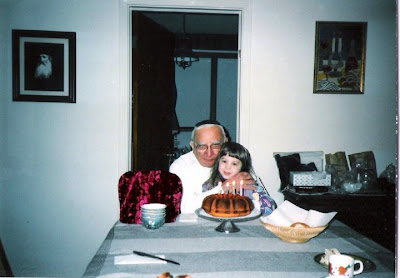 This is a picture of me and my Grandpa, who passed away on the fourth night of Chanukah, which is also December 23rd. My Grandpa passed away when I was in tenth grade, just before my fifteenth birthday. Today is the English anniversary of his death.

I always wanted my Grandpa to dance at my wedding and it made me very sad that he could not. Heshy says that he was there anyway because the souls come down to witness. My mother's tradition is that they are by the Chuppah and Heshy's is that they are by the Mitzvah Tantz. Either way, they are there. It makes me happy that my sister was able to invite him to come to my wedding. It's very fortuitous that this happens to be the year she was in Israel so she was able to visit him in the cementary.

My grandfather was a wonderful grandfather who would take us on outings, buy us slices of pizza at Jerusalem, go with us to Metsuyan to eat Chinese and sip tea, bought me an amazing doll named 'Lydia' and who would shower us in presents and toys and checks. His name was Avraham. I'm named for his mother (at his explicit request. All of the wedding presents I received from my grandmother were also given with my grandfather in mind, so I feel close to him when I use those presents.

I often wonder what he would think of me and what it would be like if he were still alive or could see how my life is currently in the process of turning out. And I miss him.

So here's for you, Grandpa. I still stand and put my hand over my heart.
Posted by Chana at Thursday, December 23, 2010

A meaningful post, Chana. May your Grandfather's memory be for a blessing!

"I often wonder what he would think of me and what it would be like if he were still alive or could see how my life is currently in the process of turning out. And I miss him."

I think about this a lot in the context of my father who passed away nearly a decade ago. For me, the best way to honor his memory is to embody the example that he taught me growing up. Sure, I do it my way, but the fundamentals of honesty and integrity that he imparted are lessons that I take with me wherever I go, so that when I think of what he would think, if he was still alive, the answer is - Proud.

great post. it sounds like you had an incredible grandfather. grandparents are such an important part of life.
what an adorable photo. it says so much.
may your grandfather's memory be a blessing!