This Purim was perhaps one of the most fascinating ones I've ever had. This is because I scored an invitation to Boro Park to observe the festivities there. For those of you who are native Haredim, doubtless this isn't so exciting to you. But for those of us who live in the Modern Orthodox world, to be invited to see the inner workings of places like Lakewood or Boro Park is to be offered a glimpse of the hidden enclave, the sanctum sanctorum. In any case, I didn't go to Tisch or anything else that I was assured would be truly memorable, but even the everday in Boro Park is deeply intriguing to a Chicagoan like me. You see, this is how it works on Purim night:

Basically, lots of boys ranging in age (starting from middle school-post high school) get together in little shuttle buses or vans, having coordinated their costumes, and go collecting in groups. They have lists of the stops they need to make. Upon arrival at a house, they wheel their huge speaker out of their shuttle bus or limo (and if they are really fancy, get their other gear- disco balls, strobe lights and the like), then walk into the person's house as though they own it. They set up, start dancing for a good 15-20 minutes, then ask for their cheque. This behavior is repeated throughout the night, with other groups walking in to set up as the first ones are dying down. It can go on till 5AM. It's incredibly lively. The only down side is the air is thick with cigarette smoke and even little children (generally boys) are smoking.

I received some extremely creative Shalach Manos this Purim. One of them was in the shape of an artist's palette and should be immortalized for its sheer genius. The creator thereof ensured that her whole family was dressed up in colors in keeping with the theme. 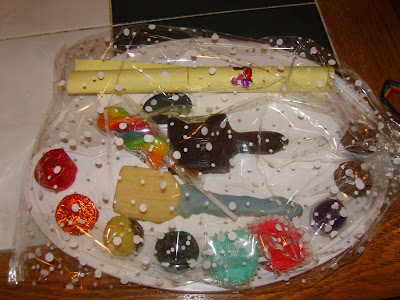 I think the poem that came with it should also be recorded for posterity:

When we look at the world Hashem created
There is so much color to keep us sated
A rainbow full of colors in all of creation
Each element unique to fulfill its station
Just like an artist needs every color on his palette
To create a masterpiece worth his talent
Every Jew is distinctive in his purpose in this world
If he imitates others, he's like a flag unfurled
So let's take a hard look around us and then at ourselves
Have we become carbon copies, put our real souls on the shelves?
Are we all black and white to belong on the page
Forgetting our own roles on this earthly stage
In honor of Purim and V'Nahafochu, let's put on our colors
Get rid of the black and stop being like others
Let's paint the town red, blue, yellow and green
Fulfill our own missions and let our true selves be seen

The other particularly creative Shalach Manos came from a member of our very own Yeshiva University Medical Ethics Society! He dressed up as the Tin Man; his wife was the Cowardly Lion and his baby was the Scarecrow. They handed out Shalach Manos bags that looked like Scarecrows as well, explaining that their whole theme revolved around organ donation. The Tinman, you see, needed a heart to be donated to him. Inside of the Shalach Manos, my friend attached a HODS Organ Donation form, donuts that had been relabelled as 'DONATE,' and all sorts of other goodies cleverly renamed or changed to reflect this need. 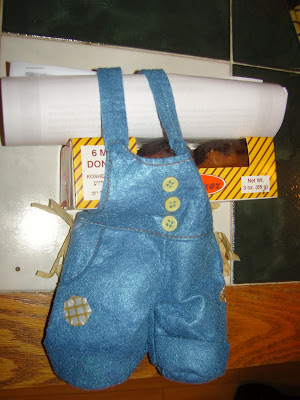 Aside from Boro Park, as you know, I had a fabulous encounter with a votive candle that enabled me to learn what burning hair smells like. Not a necessary part of my education, in my opinion, except that it gives new meaning to the term, "stuck by lightning." God may not strike me with literal lightning, but apparently fire does the trick just as well. Huzzah.

It gets better, though. This weekend was spent in Schenectady at Regional Yarchei Kallah for Upstate NCSY. This Regional Yarchei Kallah was particularly memorable because a) they paired me with an excellent chavrusa for Daniel, and she came up with some brilliant ideas which made me super-happy b) the presence of a new person who is incredibly capable and resilient despite the fact that she happens to use a wheelchair. That last provided an education for me. I had not realized that there were specially-made wheelchairs for people aside from the kind that I've seen in hospitals or that elderly people use. These specially-made ones fold up, invert or otherwise perform all sorts of fancy tricks to make one's life easier. Probably the most fantastic moment of the Shabbaton was when this girl was able to go ice-skating! You see, all the rest of us could go ice-skating in skates, and we wondered whether there was a way that she would be able to go, too. Well, tada! This particular ice-skating rink was awesome and had a special sled that could be pulled/ pushed by the Ice Guards on which she could sit. You should have seen her face. Glowing, I tell you. Absolutely amazing.

The idea my brilliant chavrusa, Laura Weiss, came up with that made me start out of my seat with pleasure has to do with contrasting Daniel 3 and Daniel 6. In one, King Nebuchadnezzar punishes three men who refuse to bow to the image he has created by throwing them into a furnace. In the second, King Darius throws Daniel to the lions when he dares to pray. Laura and I were creating a list of the differences and similarities between these two chapters and the ways in which the kings are and are not the same. Laura pointed out that while King Nebuchadnezzar is an extremely powerful king- one who creates his own rules, edicts, laws, etc- King Darius is not. King Darius is tricked into potentially killing Daniel because he signs a decree not of his own making (similar to the Haman-Ahaseurus debacle.) Laura noted that even the method of punishment was a symbol of their autonomy or lack thereof. King Nebuchadnezzar, the powerful one, prefers a method he can be sure of. He is the one in charge of heating up the furnace; he can be certain that it will kill those who disobey him. In contrast, the punishment devised by Darius (or rather, his viziers, but which Darius approves) has to do with wild lions. A king cannot control wild animals. They will eat, gorge themselves or choose not to do so according to their own whims. Even the method of punishment thus characterizes the king in question.

It was such a brilliant and subtle point and I was thrilled when Laura taught it to me.

One of the other highlights of Shabbaton was learning a new game called Mini-Tanks. Basically, two groups of boys assemble pyramid structures (usually comprised of 5-8 people total) and face off. They start crawling toward one another on the floor with a deep rumbling mantra cry of, "Mini-Tanks! Mini-Tanks!" They then collide and struggle to press onward. The side which has the most people reaching the other end of the room intact wins. This may not sound particularly amusing, but when all your NCSYers are doing it, let me assure you that it is.

In other news, I have learned it is not the wisest of ideas to stand on top of plastic toilet seats in an effort to open your bathroom window: 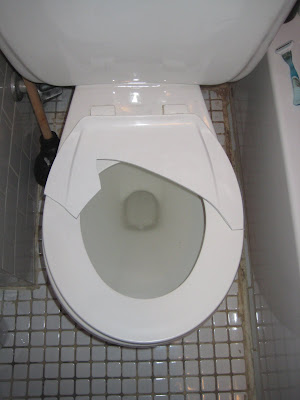 Yes, I broke it. I also fell in and somehow managed to remain intact. God loves me. (And Dana, who is the installation queen, made sure that we have a new one, that it is awesome, etc.) Over Shabbaton, something similarly amusing occurred. You see, I had pulled over my chair to sit down and began to sit only to realize that the chair...somehow...was not there. So I fell backwards on the floor, a surprised expression on my face.

Overhead, Benny was laughing uncontrollably. He had moved away the chair but had expected me to say, "Dude, where's my chair?" not to attempt to sit on air and then fall, "very gracefully," he informed me, onto the floor.

So between Shalach Manos, votive candles, wheelchairs, mini-tanks, washrooms and falling, it has been a grand couple of days. Hurrah!

Sounds like you had a few fun days.
The story with a broken toilet seat takes the prize though.

Re video: I tell you, after all is said and done, people will only remember that Numa Numa song as being a Nachman MeUman nigun...

Laughing!
Regarding bathroom - never step on the center, step on sides and everything will be good. B''H you are alive!!