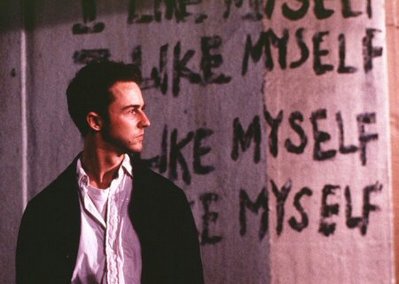 Fight Club is perhaps the most fascinating movie I've ever seen.

Fight Club is such a smart movie. It's a psychedelic, disturbing, screwed up, dark picture of our present, perhaps our future. The soundtrack is fantastic. The cinematography is brilliant. Acting is superb. And the dialogue- well, the dialogue is the epitome of all dialogue.

All the futuristic books you've read; the ones with the frightening visions of the world as it could be- well, they all culminate in Fight Club.

Edward Norton is incredible in the role of the Everyman, whom we can call 'Jack' because of a notebook he finds in which organs of the body are spoken of with regard to Jack. "I am Jack's medulla oblangata," or "I am Jack's colon." Edward Norton as narrator describes himself in this pattern throughout the movie- "I am Jack's broken heart" and the like. His voice is serious, important, matter-of-fact. We listen to him because of this.

Fight Club is a movie about consumerism, identity, the corporate world, cynicism, the mundane and pointless nature of life, living and pain. It's a movie which terrifies and intrigues; a movie which fascinates and disturbs. It's based on the book by Chuck Palahnuik, which I have never read and now very much want to read.

Who are the men of this generation?

In the words of Tyler Durdan, Jack's supposed friend,"Right. We're consumers. We are by-products of a lifestyle obsession. Murder, crime, poverty-these things don't concern me. What concerns me are celebrity magazines, television with 500 channels, some guy's name on my underwear. Rogaine, Viagra, Olestra. "

Who makes up Fight Club?

"Man, I see in Fight Club, the strongest and smartest men who've ever lived. I see all this potential. And I see it squandered. God damn it, an entire generation pumping gas, waiting tables- slaves with white collars. Advertising has its taste in cars and clothes. Working jobs we hate so we can buy s--t we don't need. We're the middle children of history, man. No purpose or place. We have no Great War, no Great Depression. Our Great War's a spiritual war. Our Great Depression is our lives. We've all been raised on television to believe that one day we'd all be millionaires and movie gods and rock stars. But we won't. We're slowly learning that fact. And we're very, very pissed off."

What does Tyler want them to become?

"In the world I see - you are stalking elk through the damp canyon forests around the ruins of Rockefeller Center. You'll wear leather clothes that will last you the rest of your life. You'll climb the wrist-thick kudzu vines that wrap the Sears Tower. And when you look down, you'll see tiny figures pounding corn, laying strips of venison on the empty car pool lane of some abandoned superhighway."

And what is the underlying theme of this entire philosophy?

"This...is chemical burn. It will hurt more than you have ever been burned, and you will have a scar. Stay with the pain. Don't shove to center. Look at your hand. The first soap was made from the ashes of heroes like the first monkey shot into space. Without pain, without sacrifice, we would have nothing. Stop it! This is your pain. This is your burning hand. It's right here. No! Don't deal with it the way those dead people do. Come on! No. What you're feeling is premature enlightenment. This is the greatest moment of your life, man, and you're off somewhere missing it. Shut up. Our fathers were our models for God. If our fathers bailed, what does that tell you about God? Listen to me. You have to consider the possibility that God does not like you. He never wanted you. In all probability, He hates you. This is not the worst thing that can happen. We don't need Him. F--k damnation, man. F--k redemption. We are God's unwanted children? So be it! Listen! You can run water over your hand and make it worse, or- look at me- you can use vinegar to neutralize the burn. First, you have to give up. First you have to know, not fear, know, that someday you're gonna die. It's only after we've lost everything that we're free to do anything."

Watch Fight Club. It's fantastic; there are no easy answers to the questions it raises, and it serves to complement almost every disturbing book I've ever read- Brave New World, Lord of the Flies, The Wave, A Clockwork Orange and so on and so forth. It's got it all. Mob mentality, confusion of purpose, belief in letting things go- letting everything go. Turning the world into chaos, and letting chaos, self-destruction and violence rule the world. Freeing people by killing them. Freeing people by forcing them to live when otherwise they would come up with excuses as to why they can't do the things they most want to do. This is the message for the anonymous people of the world. Your very anonymity surrounds you and protects you. You are all mediocre and average, and together you're going to do something about it.

And of course...when all this spins out of control...

You're in for the wild ride. It's the ride of your life. This is philosophy, psychology, wit, humor, mob mentality and ideology mixed together in one of the most disturbing, compelling, dark movies of our time. This is a classic. Anyone who says ideas aren't for the masses has never seen Fight Club. It should be standard viewing in various high-schools across the globe. I can see it as applying to everything from history to psychology class.

Such a great movie. You must let me know if you get your hands on the book.

I just bought the book recently (haven' watched the movie yet), and I'm now looking forward to it, thanks to such a great review!

I am Jack´s smirking revenge...