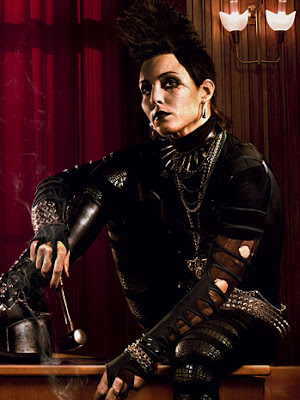 Lisbeth, who incidentally Cymbaline says would be a lot closer to my guardian angel, is one of the stars of the 'Dark Dramas with a Female Lead' that Netflix tells me I like.

"Salander's greatest fear, which was so huge and so black that it was of phobic proportions, was that people would laugh at her feelings." - The Girl with the Dragon Tattoo

Salander is a visible depiction of nearly anyone. People may be confident in their roles at work, as avengers, as justice-dispensers and so on but it's their inner world that is the most precious and the most fragile. I love to watch characters deal with their insecurities and the issues that lurk beneath the surface, because those are at once what makes them who they are but also where their darkest struggles take place. These private worlds are where all the action transpires; what the public world sees is only the overflow.
Posted by Chana at Monday, June 27, 2011