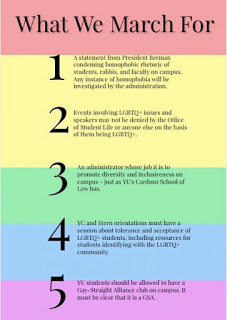 I love God. I love His Torah. I also love my students who identify as LGBTQ+. For some people, this is a contradiction. It does not have to be.
Posted by Chana at Friday, September 13, 2019

Email ThisBlogThis!Share to TwitterShare to FacebookShare to Pinterest
Labels: Halakha, LGBT, LGBTQ, Torah, We Too Are YU

There is also here a huge job for a machgiach ruchani / mashpia that ought to get mention. Life as a committed and observant gay Orthodox Jew is hard. Someone who chooses that tough row needs a support structure -- both psychological and spiritual.