In our tradition, four men entered the garden of dreams, the Pardes. Three did not survive the encounter with everything that was a part of them, whether that was their soul, their mind or their life, intact. Only Rabbi Akiva survived.

Pardes also represents the different levels of Torah knowledge. Peshat is the simple meaning. Remez is that which is hinted to in the text. Derash is the more complex meaning of the Torah. And then there's Sod, the most secret and mystical of secrets.

Pardes is also the name of a new restaurant in Brooklyn. It's located on Atlantic Avenue, in a rather trendy and hip neighborhood. What sets Pardes apart is the talent and skill of its head chef, Moshe Wendel. Moshe's life story is fascinating. He experienced France and French cuisine, then "served as sous chef at the legendary Manon Restaurant under Jean-Michelle Dumas. He later served as chef de cuisine at Pif, and Executive Chef of La Boheme, and Django- all Philadelphia-area restaurants on the cutting edge of food culture."

Wendel decided to become a Baal Teshuva, but he didn't wish to give up the creativity and talent that he found in food. So he decided to bring culture, class, creativity and the height of elegant, delicious and fine dining to the Jewish kosher world. He succeeded brilliantly in Pardes.

My friends and I went to the restaurant this past Tuesday night. Our server was a delightful lady named Julia who was extremely knowledgeable about everything offered on the menu and who made helpful suggestions based on our taste. In addition, it was lovely to see how professionally the servers interacted with the Chef. Throughout the meal, they referred to him as 'Chef' in terms that suggested respect and even a bit of reverence. At one point, Julia asked us whether we had called her over, and when she realized we hadn't, said 'Oh, then it must have been Chef.' It reminded me of the respect that students give their beloved Rebbe.

The seating is intimate, the ambience elegant. The room was packed- so when you go, be sure to make reservations in advance. Menus were given to us on clipboards- the first page encompassed appetizers, entrees and dessert while the subsequent pages were devoted to the expansive wine (and beer) list. (I chose to get sangria- it really did taste like summer.) I was impressed to see that the menu deviated in some ways from the one that appears on the website - clearly the Chef is always updating and changing his offerings, using seasonal ingredients to great effect.

Our table ordered sweetbreads, lamb tartare and Pardes fries as appetizers. For entrees, we chose Duck Confit with White Chocolate sauce and Blueberries, Black Angus Rib Eye (done medium-well) and Black Angus Hanger Steak (more on the rare side). A member of our party was actually a chef himself (having studied in culinary school in Israel and having interned at restaurants in Italy and elsewhere) and he noted that the cook on the rare steak was fantastic, and relatively tricky to do well. For dessert, we chose to indulge in the Georgia Peach Crumble, Chocolate Mousse with Strawberries and the Ice Cream Sandwich with Edible Flowers.

Everything was delicious. But it was more than that. It was beautiful to behold. The presentation was stunning. When our food arrived, we spent several minutes simply looking at it before we could bear to eat it. It was plated exquisitely, textures contrasted and complemented one another, the taste was extraordinary and the overall experience was simply magical.

The best part is that Pardes uses pastured meats, which means that the food you are eating has been ethically produced- and is delicious. Addendum: My husband called the restaurant and discovered that contrary to what I had thought, one cannot assume all the meats are pastured. Ask each night to find out what on the menu has been created through using pastured meats.

I've had the pleasure of eating at Abigael's, Le Carne, Mike's Bistro, Prime KO, Prime Grill, Wolf & Lamb and Le Marais...and Pardes is better than all of them.

This is the place to go if you want to truly experience food. 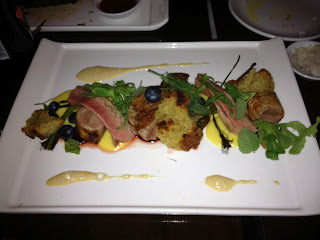 This is the Duck Confit with White Chocolate Sauce and Blueberries, amid other flavors and reductions. 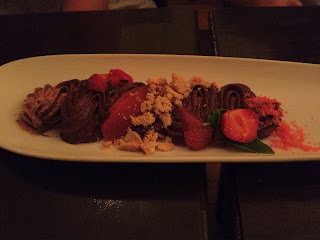 Chocolate Mousse with Strawberries. The strawberries were done different ways- and included a puree and strawberry pop rocks! 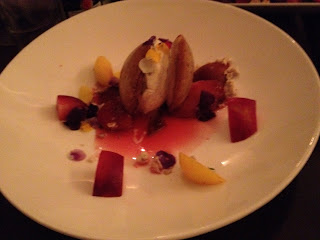 Ice Cream Sandwich with Edible Flowers- this tasted exquisite and the cookies themselves housed inner chocolate that was truly decadent. 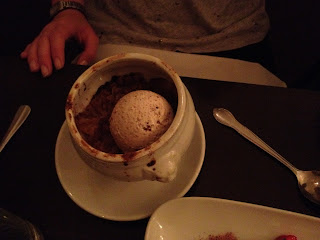 I owe Heshy Fried of Frum Satire for first reviewing this restaurant. I found out about it through him- and I'm so glad I did!
Posted by Chana at Friday, July 20, 2012

Sounds delicious! Now I have to wait for the end of the 9 days to try it.

Joel, you need to read the post more carefully. I specifically said "The best part is that Pardes uses pastured meats, which means that the food you are eating has been ethically produced- and is delicious."

R'Chana,
Yadati biti yadati - my thoughts related to a number of other items- the first related to the many commenters pushing non-meat as the way to go, the second (a personal sensitivity) was the justifiable sensitivity to animals in the prior post compared to the need here to mention other providers who didn't measure up and lastly (another personal sensitivity) the language and importance given to the consumption function.

BTW we were there a while back and my friends who know this stuff tell me it was quite good.

Other people had the following to say:

She didn't say they didn't measure up. On the contrary, she said they were all amazing (but not as good) - I don't see a sensitivity issue here. Everyone is allowed to have a favorite.

FWIW, Philo, you don't have to wait until the end of the 9 Days - they're open during the 9 Days with a fish and veg menu. I went last night and it was as delicious and innovative as always.

Yeah, the Yelp reviews are unspeakably lame. But look under the "filtered" reviews on Yelp -- there are 5 normal reviews and 21 filtered ones. And most of the filtered reviews are positive.

Who wants to eat at a restaurant where only 1 in 4 patrons leaves bit alive and sane? That aside the place sounds wonderful.