Did Esther Risk Her Life Twice?

Two years ago I wrote a post entitled "Unsummoned" regarding my question as to whether Esther appeared unsummoned before the king twice. R' Gil Student turned this post into a dialogue and discussion. Now, in a fun blast from the past, I decided to create a source sheet regarding some of the points of view on this issue. Thanks to Jordan who was the one who provided me with lots of the sources in the first place! (Although I read through many more sources than I actually put on this sheet.) 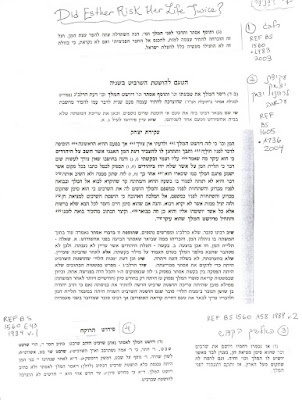 Ralbag in Source 1 explains the text the way that I did, stating that Esther desired to undermine Haman's advice and thus went before the king unsummoned once again. In this way, she risked her life the second time as well.

R' Yitzchak ben Arama in Source 2 disagrees with the Ralbag's explanation. I'll be honest and say I don't entirely understand everything he says, so if someone wants to explain it to me, that'd be grand.

I read the Alshich in Source 3 as supporting my point as well. He writes that the King's mercy was awakened and thus he extended the scepter to Esther which was a symbol of finding favor, as we have seen before when he extended his scepter to her so that she would live. (The fact that he compares it to what happened before suggests, to my mind, that both scenarios are similar.) Additionally, he adds that perhaps the King extended his scepter to hint to her that she should rise up from the ground, where she had flung herself weeping.

Source 4 is the Rokeach. I'm interested in the 'davar acheir' here because he mentions a point Jordan had raised to me. Jordan mentioned that based on a careful reading of the Targum to Esther 4:11, it seems that the law against going in unannounced was instituted by Haman. That being the case, suggested Jordan, it is possible that after the demise of Haman she would not be risking her life by approaching Achashveirosh.

The Rokeach says differently. It's not that after the demise of Haman that the law was abolished, but rather, after his ten sons were hanged. The law only changes after the last vestige of Haman is gone. The Rokeach proves this by citing Esther 9:12, where the King simply speaks to Esther without the prelude/ introduction of Esther entering the room and his having to extend the scepter to her. Now, if the Rokeach believes that this law instituted by Haman was only abolished after the death of his ten sons, it follows that when Esther came the second time the law was still in effect, and thus she did risk her life that time as well.

As a tangential point, Jordan noticed another difference. In Esther 8:4, Esther arises and stands before the king. The words used are: וַתָּקָם אֶסְתֵּר, וַתַּעֲמֹד לִפְנֵי הַמֶּלֶךְ. In contrast, in Esther 5:2 the king notices her already standing and extends his scepter; therefore she draws close and touches it: וַתִּקְרַב אֶסְתֵּר, וַתִּגַּע בְּרֹאשׁ הַשַּׁרְבִיט. What, questioned Jordan, is the difference? Why does she arise in one scenario and not in the other?

At the time I didn't have an answer but I think I have one now. The Esther presented in these two scenarios is very different. The Esther who comes unsummoned the first time waits for the king to notice her. She is already standing; she has not prostrated herself before him. She is simply waiting, עֹמֶדֶת בֶּחָצֵר, until he notices her. Only then, when he bids her, does she draw near to him. The second time Esther visits the king, she has the first occasion to use as precedent. Thus she is not as afraid. This is an anguished, uncontrollable Esther who does not humbly wait to be noticed, fearing for her life, but bursts in upon the king, weeping and prostrating herself. This Esther is not composed; she is not orchestrating a careful plan. This Esther is in pain and she is pleading, not resorting to plots and machinations and banquets, but simply pleading. This is why he bids her arise. In Chapter 5, the king did not have to ask her to get up because she had never fallen down in the first place!

Anyway, that's some Torah for Taanis Esther, in memory of the Queen who risked her life- twice- for us.
Posted by Chana at Wednesday, February 24, 2010

Email ThisBlogThis!Share to TwitterShare to FacebookShare to Pinterest
Labels: Jordan

You don't ask this, but why, in 8:3, was Esther talking before the scepter was offered? "Vatosef Esther vatedaber lifnei hamelech..." and "vayoshet hamelech" is the next pasuk. What did she say (the Megilla does not tell us!)?

You're not the only one who was bothered by that question. See the Septuagint.

IIRC, the Meshech Chochma is the one who points out that Esthers plan was to convince the king that she was having an affair with Haman, which would lead the king to kill them both. That explains why she invited Haman,why she had a second party (He didn't get the hint the first time) and why Esther made the whole big deal out of it with fasting on Pesach- she thought she was going to die herself to save the people, and was preparing to do so.